Innovator of the Month Interview by Hugo Cui.

Fastree3D is an innovative startup developing fast, three-dimensional imagers operating at the limits set by quantum physics. Launched in 2014 as an EPFL/TU-Delft spin-off, the company, based in Switzerland, is led by Claude Florin, CEO. Fastree3D’s sensors’ low latency, resilience to interferences, and software-defined control enable implementations ranging from smart cars to automated industrial vehicles. They prevent collisions by monitoring the distance and motion of surrounding objects with high confidence. 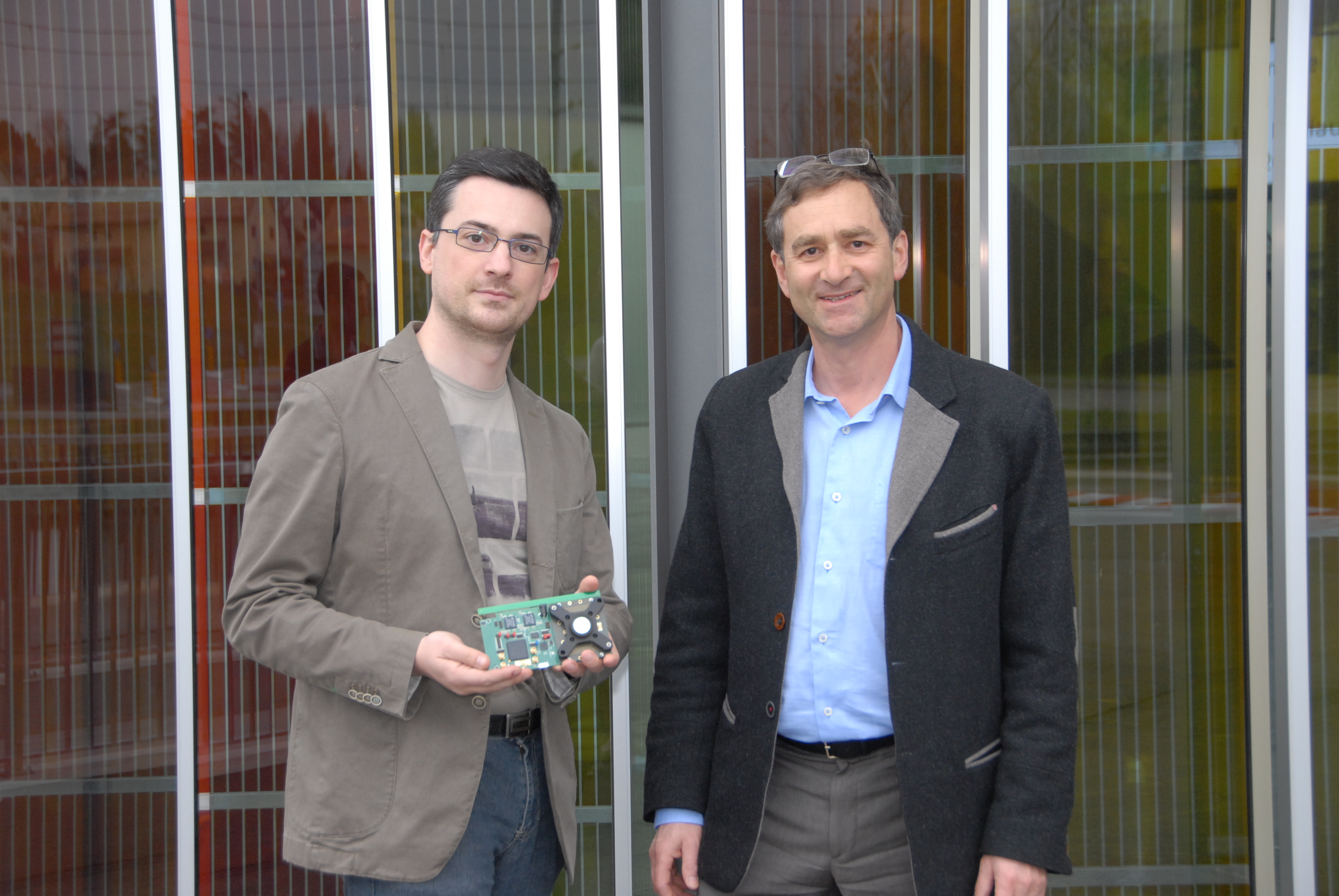 Could you tell us more about your imagers and how they improve on other existing LiDAR sensors on the market?

Fastree3D’s mission is to develop the fastest, safest, and smartest 3D LiDARs1 imaging sensors. We push the limits of our detectors in these three directions. The latency of our sensors is of the order of ten milliseconds, which enables a car to brake in time when a pedestrian appears within a few meters. The safety parameter results from monitoring motion and directions, for thousand points in the scene, better than single-beam radars, while performing statistical quality control of every measurement in real time. Thirdly, our sensors display smart integration with vision pipelines driven by edge computing. Optimizing on-chip the detections results in effective sensor fusion, object recognition, or trajectory forecasting. Our sensors also benefit from cost-effective semiconductor manufacturing.

I understand that Fastree3D is mainly targeting the urban traffic safety market. Are you addressing any other market segment?

We have indeed focused on city traffic safety, where fast and short-range detection is highly valuable. Several adjacent markets require similar capabilities. One example is autonomous industry robots and vehicles (AGVs2) used in many industries and evolving towards safer human-robot collaboration. Safety is equally important as there are as many forklift work accidents as pedestrian injuries in city traffic. As our system-on-chip3 product is software-defined, we can adjust these parameters to address different use cases.

Do you already have some engagements or prospects with car manufacturers to integrate your technology in smart cars?

Our market deployment pace follows game-changing technology progress at EPFL. The intuitive idea that you could measure distances with a “Flash LiDAR”, just as you perform flash photography with your phone, required solving multiple technical challenges. This year we reached a demonstrator functional in a city street environment.

Rather than integrating our technology into vehicles by ourselves, we opted to engage with the automotive manufacturing supply chain, performing over the last three years joint R&D with leading Tier-1 or Tier-2 companies such as Bosch and NXP. We offer them our components and they supply system solutions to automotive OEMs4. Our objective is to start producing a system-on-chip in 2022 that will then integrate into vehicle systems.

Is there any chance we will find Fastree3D’s technology in self-driving cars in the near future?

Could you tell us how Fastree3D was born?

Key people and my own emotions played a role. I met in 2012 Prof. Charbon (EPFL), who is an incredible scientist in the field of single-photon detection6 (SPAD) with startup experience that led to one of the first mass-market 3D camera (Kinect™7). To develop a time-of-flight measurement chip, we teamed up with the best expert in time-to-digital converters, Prof. Bogdan Stazewski8, then at TU-Delft. Combining a large array of SPADs with precise time-to-digital converters (TDCs) for outdoor applications was still a recent idea at the time. A personal emotional moment occurred when I lost my father hit by a car, on a city street, despite the low driving speed. I realized that 95% of traffic accident deaths or severe injuries affected pedestrians and cyclists, a quarter-million every year in Europe and North America.

But using LiDARs for cars was still a crazy idea, apart from DARPA research competitions using industrial-grade technology. Amid regular discussions, the Fastree3D’s technology concept was born (the name itself derived from “readout electronics”). Then, as is quite often the case, we went through cycles: we developed single-photon detectors, waited for the availability of powerful vertical-cavity lasers, integrated three generations of system demonstrators. Overall it took five years.

Could you tell us more about your team?

We are still a small team of ten people, starting with Prof. Charbon (CSO) and Lucio Carrara (CTO). Over the years, a multi-disciplinary team has been built: analog and digital circuit designers, laser specialists. Personally, my past business and technical career was not in semiconductors but always close to digital imaging and signal processing: I contributed to design, in my early career, new and affordable digital radiology systems for Philips Healthcare and later, with HP Labs, innovative mobile phone services by processing video.

It is exciting to see new team members attracted by the same combination of challenges and application promises. Whenever I greet a candidate, I remind him we work on a “mission impossible.” We need to combine our skills to implement trade-offs among constraints such as laser eye-safety, optics, algorithms optimization, low power time measurement. Our CSO helps us approach the limits set by quantum physics, and the team pushes the functional boundaries by adding digital processing blocks and optical components. We also benefit from experienced advisors who successfully faced similar issues in other Companies.

How do you picture Fastree3D in five years?

In terms of business, we hope to see these sensors for cars and robots becoming pervasive. We are at the forefront of the most scalable version of LiDARs ready for manufacturing in a million units. The sensor is software-defined so that other developers can integrate it within their toolkits or vision processing pipelines. Our system-on-chip hides the physics complexity and makes it an easy-to-use component that can be widely adopted.

We are at the forefront of the most scalable version of LiDARs ready for manufacturing in a million units. Our system-on-chip hides the physics complexity and makes it an easy-to-use component that can be widely adopted.

Our project also justifies expanding the team for growth to about thirty people. We could benefit from more talents to address new application domains. As the product relies on multiple photonics and computing technologies, it fosters a culture of continuous innovation. We also foresee that the company may join a bigger industrial group, allowing it to address much larger innovation challenges, as it happens to many startups.

How did the Swiss innovation ecosystem help Fastree3D’s development and growth?

Like many tech startups, we spun-off from the alma-mater, in our case, EPFL’s advanced quantum architecture Lab9. We could build upon a decade of research but still had to transfer this into a proof of concept product. EPFL licensed foundation patents provided access to early prototypes of a Ph.D. student, Samuel Burri, which led to SPIE awards, the world’s largest photonics society, and conference organizer. We designed new circuits for our second generation prototype and built the camera with BFH Fachhochschule, Prof. Dr. Theo Kluter, under an InnoSuisse grant. We were top finalists in several startup awards (>>venture, Top100, Bilan magazine, MassChallenge), which helped to obtain Seed financing, for instance, from Venture Kick. As we started industrial cooperation in the Netherlands, we observed that Switzerland offers support comparable to leading high technology regions in Europe. What is impressive is the continued progress of the EPFL and Swiss photonics industry during the same period. This year, EPFL demonstrated a 4D camera capturing 24,000 images per second and approaching one mega-pixel 3D detectors10. That has attracted the world’s attention, and we benefit from new technology transfer opportunities.

What advice would you give to aspiring entrepreneurs among EPFL (but not only) students?

It starts with knowing and adapting to your character. For a significant innovation or technology transfer, it often takes more time than you initially think: your original plan needs to be multiplied by three or four. During the start period, you will face a lot of rejections and face moments of doubt. My first advice for becoming an entrepreneur is to keep the stubbornness you had as a little boy or a little girl, when your mother told you “don’t do it,” and you still did it. That’s very much the spirit needed to pursue (apparently) crazy ideas. There will be many people advising you against it. It’s not that you don’t listen to them: you may even think they’re right, but you can balance if the bet is worth trying. It requires a “leap of faith” that is reasoned and sustained in time.

It requires a “leap of faith” that is reasoned and sustained in time.

My second advice is that you need close friends sharing your vision, much more than you need business plans and financing. Friends are the beginning of a team and, in our case, helped our communication to convince others about the innovation. Friends are also found among entrepreneurs, such as those illustrated by Innovation Forum Lausanne. With a bit of stubbornness and good friends, real entrepreneurs pursue their goals despite adverse advice and then attract successful other people around them along the way.

¹Light detection and ranging (LiDAR) is a method for measuring distances (ranging) by illuminating the target with laser light and measuring the reflection with a sensor.

²Automatic guided vehicle (AGV) are mobile robots used in industrial applications such as warehousing or manufacturing but also hospitals and more recently for last-mile delivery of parcels.

³A System-on-Chip (SoC) is an integrated circuit (“chip”) that integrates most components of a computer. These include a central processing unit (CPU), memory, input/output ports and detection or signal processing– all on a single microchip, the size of a coin.

5Automated driving assistance systems (ADAS) are categorized based on five levels of automation. For example, in level 2 the driver performs most of the decision making but can be assisted by multiple aids including autonomous obstacle avoidance, and autonomous parking. At level 5, the vehicle is fully autonomous but such systems have not yet been embedded in commercial vehicles.

6Single-photon avalanche diodes (SPAD) are semi-conductor photodetectors, from the family of photodiodes. When implemented with an appropriate “reverse bias” voltage the impact of one of few photons triggers an “avalanche” current. This enables very fast and efficient light detection, a property that is essential in LiDAR. SPADs can also be manufactured in the same CMOS processes used in image sensors, enabling high resolutions and implementation of digital processing techniques.

7Professor Charbon was the chief architect of Canesta Inc., the creator of the Kinect™ 3D camera for consumer applications and human-computer interfaces. In 2002 the Canesta released a CMOS-based single chip 3D sensor implementing SPAD detection and phase de-modulation (US US6580496B2 patent by Edoardo Charbon and Cyrus Bamji). Microsoft acquired Canesta in 2010 and switched it’s Kinect™ 3D camera to this technology, initially for gaming and later for applications in robotics and healthcare. By 2017 35 million units had been sold, making it a pervasive 3D vision technology.

10MegaX is extremely fast and can take up to 24,000 images per second; in comparison, movies are filmed at 24 images per second. Achieving high-resolution up to 1 megapixel expands the potential toward novel applications in microscopy, automotive, and 3D robotics. EPFL holds the current record at 512×512.

Innovator of the Month Interview with Novigenix

Innovator of the Month Interview with Diaxxo